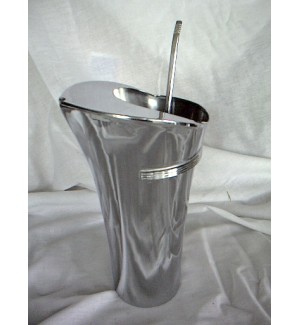 Availability: Out Of Stock

This is a ca 1930’s cocktail mixer designed by Walter Von Nessen. It is 9” tall and made by Chase Copper and Brass Co. and includes the matching11” stir spoon. They are both marked Chase and in like new condition inside and out .

This was on loan to the Museum of the American Cocktail (MOTAC) from 2004 until January 2006. The Museum was located in The Pharmacy Museum in New Orleans.  They were then moved to the new museum located at The Commanders Palace inside the Aladdin Hotel in Las Vegas until November 2006.  It then went back to New Orleans inside the MOTAC at the Southern food and beverage museum until it found it's way home in 2018.